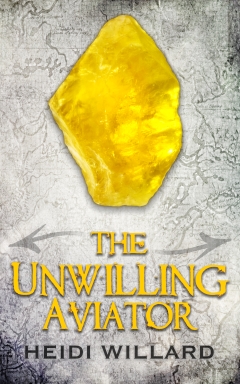 Part of the The Unwilling series:

Fred and friends find themselves in a mess of new troubles as they continue their journey to destroy the Region Stones. The road takes them to the windy city of String where Fred is recruited by Ned to win the stone in a competition of flight. Troubles dog their steps as they face rival aviators, greedy merchants, and pointy hats. Will Fred survive the tournament, or will he go crashing down with everything else?

“Please don’t eat so close to me,” Pat growled.
Canto slurped more of a wriggling mass of living spaghetti into his mouth before he glared at her. “Dirth Worms are a specialty Ah won’t be missing out on. Not when we’re so close to the border.”
Pat glanced over to Ned. “Please tell me we are close to the next region,” she pleaded.
Ned glanced up at the stars overhead. The companions sat around a crackling fire eating their dinner, or in Pat’s case losing her appetite watching Canto consume the squirming worms. The clearing for their camp lay just off a dirt road that they’d followed for seven days eastward from the city of Dirth. Around them stood giant oak trees well-watered by the thinning marsh waters of the Dirth region. Their branches stretched out as though reaching for the companions.
Fred looked at the branches as he munched on his food. He couldn’t help being reminded of the fight so long ago with the tree monsters.